A collective move toward a healthier environment 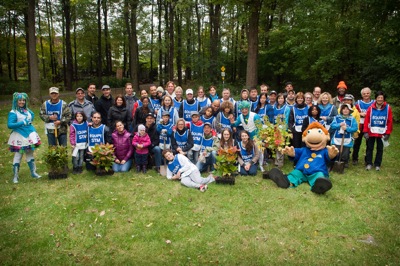 In 2011, on signing an agreement on the exclusive distribution of a free daily in the métro, Collectif Média s.e.c. (limited partnership) made a commitment to plant two trees for every tonne of paper recovered in the subway.

This environmental gesture which led to a day of action on October 21, 2012, in Angrignon Park, one the most popular of Montréal’s parks, and underscores the STM’s commitment to contributing to sustainable development through the conservation and development of biodiversity.

So far, more than 1,700 trees and shrubs have been planted to make up for the over 851 tonnes of paper recovered in 2011. The initiative was welcomed by Planting Coordinator and President of Héritage Laurentien, Patrick Asch: “This will help protect plant diversity in one of the city’s largest parks and will help improve air quality in Montréal, Canada’s second most polluted city.”

This significant move was made possible by the support of public transit users in close collaboration with STM employees and the Journal 24 Heures.

For more information (in French only) about Héritage Laurentien’s projects, click here.

Sign up to be the first to know about our products and services.